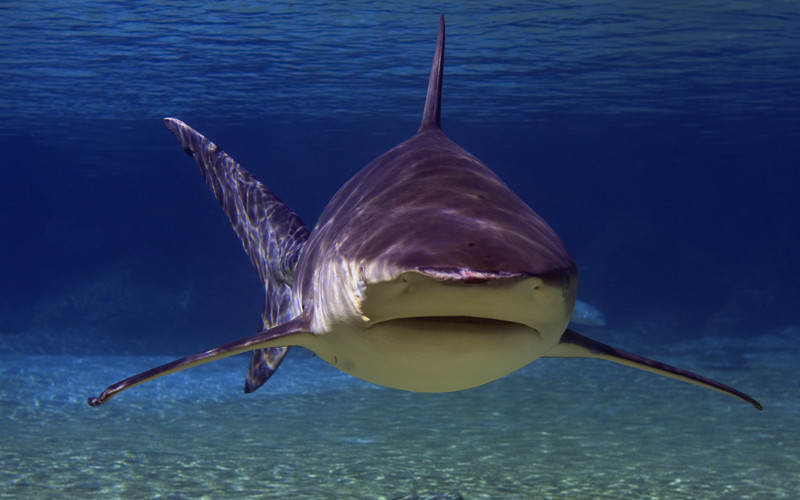 The bull shark is also known as the zambezi shark. It should not be confused with the sand tiger shark (Carcharhinus taurus), which is also called bull shark in other languages.

Many people consider the bull shark one of the most dangerous sharks in the world since this species has many attacks on humans registered, and according to the Internation Shark Attack File, it is the third species with most attacks on humans, only after the great white shark and the tiger shark. Besides, its aggressiveness and its ability to live in saltwater as well as freshwater, add further concern.

The reason why it is called “bull shark” refers to the short, sturdy form of its body that resembles a bull, and perhaps it is also due to its hostile behavior. It has a blunt snout, rounded and wide but not very long. It has two dorsal fins with a triangular shape, of which the second is visibly smaller but the tips of both are dark in young specimens. They do not have an interdorsal ridge.

The reason why it is called “bull shark” refers to the short, sturdy form of its body.

Their eyes are quite small, which gives a clue about their limited visual sense and their preference for waters near the coasts where the prey are abundant. Instead, its movable jaws contain several triangular teeth that measure about 3 inches long.

Bull shark distribution is along the coastal waters of tropical and subtropical seas around the world. In the Atlantic Ocean, it is located from the United States to Brazil and from Morocco to Angola. In the Indian Ocean, it is present in waters ranging from South Africa to Kenya and from India and Vietnam to Australia.

It is one of the few species of sharks prepared to inhabit saltwater and freshwater, in the latter for a long time. It dwells in waters ranging from 150 to 30 meters deep of oceans, seas, bays and harbors and even ventures into lakes and rivers. 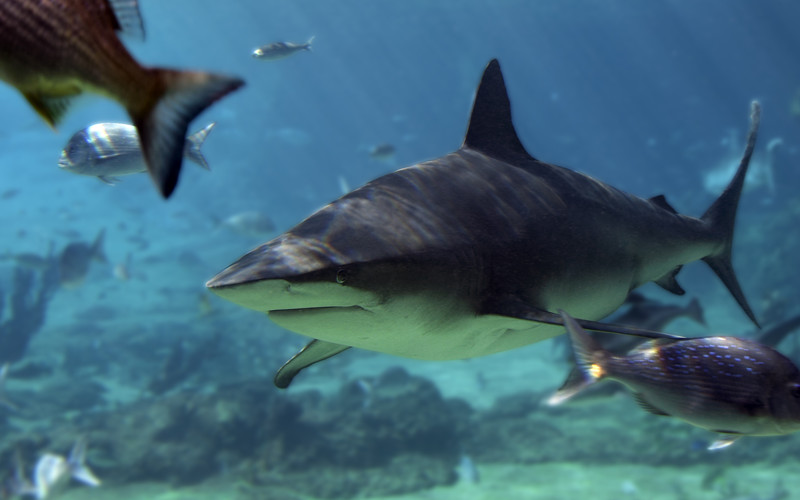 The bull shark is an opportunistic carnivorous predator but can eat almost anything it finds in its way including fish, rays, sea turtles, mollusks, echinoderms, young sharks (including the same species), mammals and seabirds. In the stomachs of some individuals have been found remains of hippos and humans but these are not a regular part of their diet. Their favorite fish are chelons, mullets, mackerels, and snappers. However, their food consumption adapts when they dwell in freshwater areas, and then feeds on turtles, shrimp and other species of that habitat.

It hunts only in murky waters and compensates its limited sense of sight with a keen sense of smell. If they find a suitable prey, they swim directly toward it reaching speeds of up to 19 kilometers per hour; it hits the victim, and then sink their sharp teeth into the flesh. The rest is already known.

The bull shark is viviparous, and the age to reach sexual maturity depends on the geographic region in which it is located but usually the age is ten years old for males and 10.9 years old for females. Some individuals can mature when reaching eight years of age.

Mating occurs in late spring and the summer. The mating scars on the females’ body indicate that during the process, the male bites his mate.

The gestation period lasts 10 to 11 months. The female has between 1 and 13 offspring, often in brackish water or in freshwater lakes.

Probably their most notable behavior is that they can tolerate freshwater.

The bull shark prefers loneliness than the company of other sharks of its species, so it hunts by itself. It is not migratory, but some individuals from South America travel thousands of kilometers to the Atlantic Ocean, and many often go to fresh and brackish waters to give birth.

Probably their most notable behavior is that they can tolerate freshwater. While their body adapts to this change (it reduces the amount of salt and urea to suit different salinities), it is surprising that they are not afraid of water systems that are less salty and more shallow than their natural habitat. They avoid regions with low temperatures.

It shows certain aggressiveness and tendency to live near populated areas, a fact that makes it an animal of care.

Commercial fishing usually does not try to catch bull sharks, but this species is classified as “Near Threatened” on the IUCN Red List without compelling reasons.

Over time it has been captured to obtain its meat, its skin and its oil for several purposes. Recreational or sports fishing is also responsible for the situation. In current times many aquariums demand the presence of the bull shark in their facilities since it is a species that adapts well to life in a closed environment and catches people’s attention. This practice still does not seriously harm shark populations but is a potential danger if demand increases.

On the other hand, roaming areas close to human populations makes it an animal more vulnerable to the effects of civilization, such as pollution and incidental fishing.

At the moment there are no specific programs, plans or actions for the conservation of the bull shark.