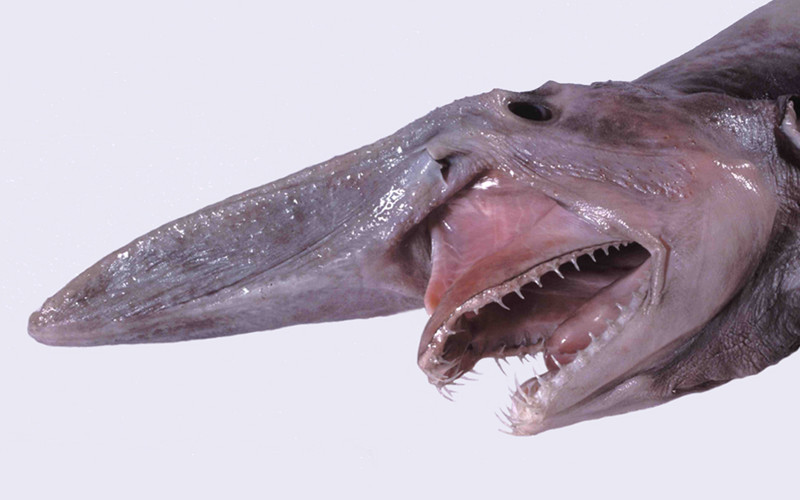 Among all sharks, this species stands out for its unusual appearance characterized by a prominent snout. It is the only living member of the Mitsukurinidae family, and it is often called a “living fossil” since its ancestry goes back to the Cretaceous period and it keeps such primitive characteristics.

It was given a scientific name in honor of two people who collaborated in its discovery in the late nineteenth century: Kakichi Mitsukuri and Alan Owston. It belongs to the order Lamniformes and the genus Mitsukurina.

The goblin shark differs from other shark species by having a flattened snout that protrudes from the top of its head, resembling the blade of a sword. Its jaws are protrusive, and the inside contains 35 to 53 rows of upper teeth and 31 to 62 rows of lower teeth. The length and width of its teeth are variable because those that are near the center of the jaws are longer than those on the back.

Has a flattened snout and its jaws are protrusive.

It is a medium-sized shark. The length of adults ranges between 3-4 meters, and the weight can reach 200-210 kilograms.

Individuals of this species have been found in the Pacific Ocean, in the Indian Ocean, and in the Atlantic, so it is likely to have a global but non-uniform distribution. However, it mainly concentrates in waters of Japan, Australia, New Zealand, Guyana, Suriname, French Guiana, France, Madeira, Portugal, South Africa and the United States.

The sightings of goblin sharks are very rare and indicate that the species lives in waters on continental platforms and slopes, at depths of 1,300-1,370 meters.

The remains in the stomachs of several individuals captured reveal a carnivorous feeding based on teleost fishes, ostracods, squids, crabs, and cephalopods. Garbage and pelagic species have also been found in their bellies. Therefore this shark can swim in depths as well as on shallow waters to find food.

It detects prey by combining its senses of sight, smell, and electro-perception. If it is near the ocean floor and discovers a victim, it observes it from below without moving. It is not a skilled or fast swimmer, so it moves slowly towards its food to avoid being discovered.

The jaws of this shark have the ability to slide forward thanks to specialized joints that at the moment of biting are released from their tense condition and move abruptly and quickly to find the body of the prey.

Although it is an efficient predator, it moves slowly, and that is why its hunting strategy is to wait until the prey is unaware. Their feeding based mainly on migratory fish suggests that many of the activities of this species occur during the nights or mornings.

Another method of finding food is moving the sand once it senses that something is beneath it. Probably the least used sense is the sight because it has tiny eyes.

It does not represent any danger to humans.

There is a lack of information about the reproduction habits of the goblin shark since the sightings have been few and therefore, also the research. The few data available came from individuals caught accidentally and not from observations directly in their habitat.

Researchers believe it is ovoviviparous and migrates to mate or spawn as adult females gather in the east coast of Japan during the spring.

As it is rarely seen and captured, the goblin shark status in the Red List of the UICN is “Minor Concern.” Their few known threats are the accidental catch, mainly on the coasts of Japan. Besides, their strange jaws arouse curiosity to collectors who can pay from 1,500 to 4,000 dollars to get one.