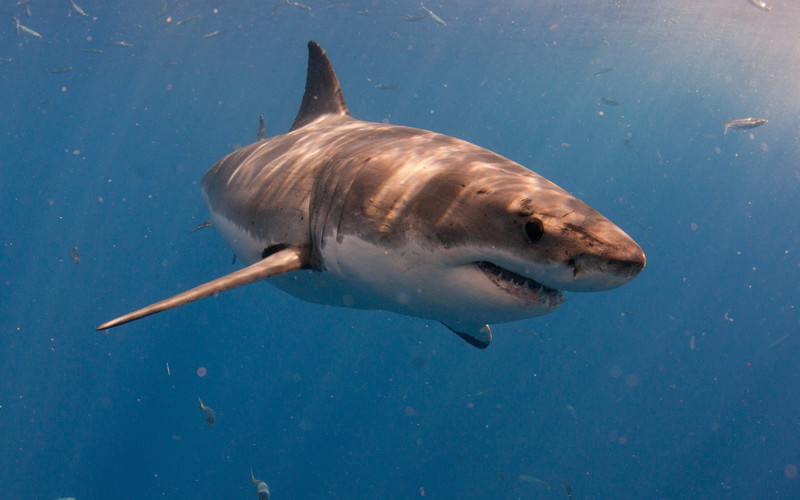 The legendary great white shark is a cartilaginous fish that has caused fear and admiration for many years. It is considered one of the biggest predators of the oceans and the fiercest, but there is more imagination than truth in this sentence. His reputation as a “man-eater” is also far from reality.

The white shark is a member of the class Chondrichthyes, the subclass Elasmobranchii, the order Lamniformes, the family Lamnidae and the genus Carcharodon.

The body of the white shark is robust and fusiform, about 4-7 meters in length but the average is 6 meters. Its weight is between 3,000 and 3,400 kilograms. Adult females reach dimensions greater than males, which are usually 2 meters smaller.

Their sense of smell is very sensitive, which facilitates the detection of prey at a great distance.

It has a narrow pointed snout, two pectoral fins and a first dorsal fin with a triangle shape. The caudal fin is crescent-shaped, and its upper and lower lobe are long and of very similar size, almost symmetrical. The mouth measures 0.9 to 1.2 meters wide; Is provided with several rows of sharp and serrated triangular teeth, that the shark changes several times throughout his life. It has small onyx eyes and nostrils towards the end of the snout.

It exhibits discoloration of the body, because while the back is gray or blue, the lower area is lighter. This characteristic gives an advantage when hunting because preys do not notice the figure of the shark, which is confused with the bottom of the ocean.

Their sense of smell is very sensitive, which facilitates the detection of prey at a great distance, and together with the Lorenzini ampoules which detect electric fields of moving animals make them efficient predators.

The distribution area of the great white shark is very extended; It ranges from the latitudes 60 ° north to 60 ° south and can be found in tropical coastal waters as well as temperate and even cold. In general, the temperature of the water that inhabits oscillates between 12 ° and 24 ° Celsius.

It is commonly found on the coasts of North America from Newfoundland to southern Mexico in the Atlantic Ocean and from Alaska to southern Mexico in the Pacific. Outside of the American continent, the great white shark dwells mainly the waters of South Africa, the Mediterranean Sea, Japan, and Oceania. There is a substantial population in the Dyer Island in South Africa, and that is why there is a common place for research about their life.

Their habitats include coasts and continental and insular platforms whose waters do not surpass 1,875 meters of depth. In the open ocean, it inhabits to depths of up to 1,200 meters. It is an epipelagic shark that has been seen close to the shore on many occasions, but it is not an eminently coastal species. 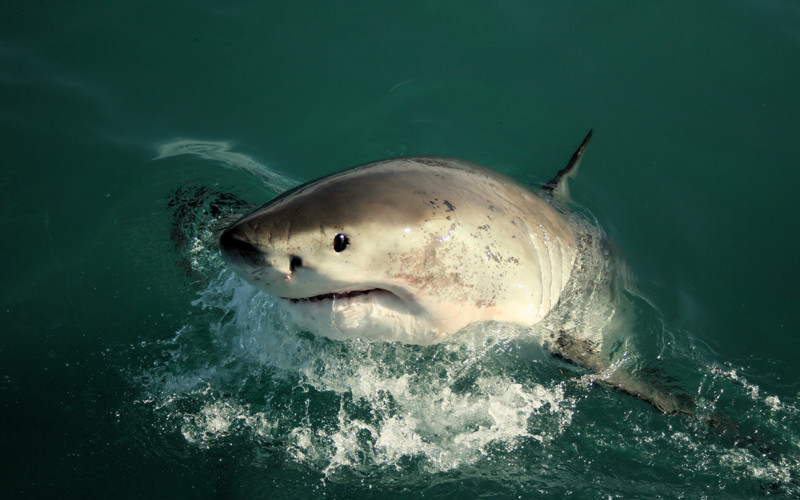 The diet of this shark species is, of course, carnivorous. However, it does not usually feed on large species, but on smaller animals such as squids, rays, and other fish. Adult individuals also include other sharks, seals, sea lions, dolphins and whale corpses. They sometimes catch turtles and seabirds to feed on them. They have a clear preference for fat-rich prey.

They have different hunting strategies depending on the target victim and the size of the species. The most usual approach is that, once they detect by electroreception their possible food, they locate below and then stealthily swim vertically. Once closer, they inflict a deadly bite and wait for the animal to bleed and die and then eat it. If the prey survives that, they try to hold it with their lower teeth while the upper tear the tissues. The most common forms to die of their preys are decapitation, mutilation, and bleeding.

The great white shark is a fish mostly solitary although it can reunite with others of its same species. He has been seen a few times accompanied by a female or a male and even in small groups. In their groups, it is likely that there is hierarchical dominance, and the females are in the lead, but among all, large individuals dominate the small ones, and the residents of the group for a long time dominate the newcomers.

This shark is active both day and night. Interestingly, they jump out of the water sometimes to look the surrounding and look for prey. They are not aggressive with their own species, but if they feel threatened, they may bite his antagonist as a warning.

Most people expressly fear the great white shark and consider it a man-eater predator. Definitively, it is a powerful, aggressive and efficient predator, but it has no preference for humans. The attacks usually happen because of the shark confusion of a person with prey, and as a consequence, they give a “test bite,” but it is unlikely that it keeps eating once it finds that it is not its usual food. 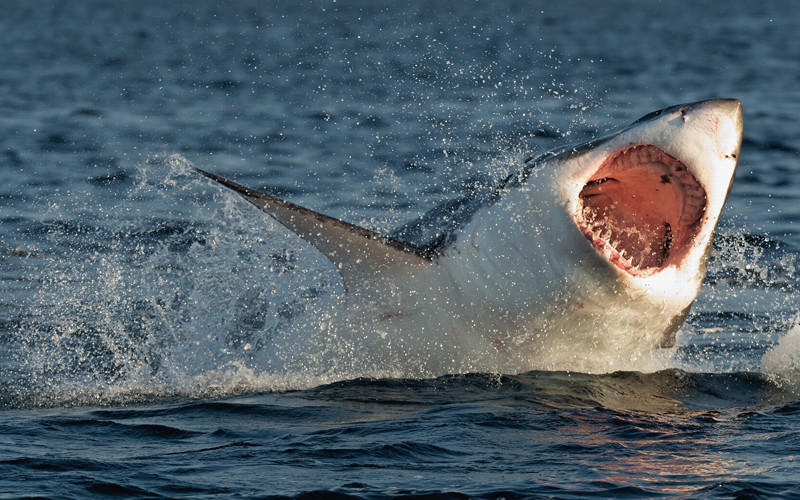 Their reproduction is ovoviviparous. Bites on the flanks, backs and pectoral fins of females indicate that males exert “soft” aggression before and during mating. Males fertilize the eggs internally, inserting their claspers into the female oviduct so that eggs develop inside their body. Before birth, developed embryos presumably practice oophagy.

The gestation period lasts between 12 and 18 months, after which the female gives birth between 2 to 10 live offspring measuring more than 1 meter long. Female gives birth every 2 or 3 years.

The great white shark is at the top of the food chain, and except for killer whales, whales, and humans, it does not have predators. However, the Red List of the International Union for Conservation of Nature (IUCN) has classified it as a “Vulnerable” species, since overfishing and by-catch have led to a decrease in the number of individuals, as they have a low reproduction rate.

Some countries such as the United States, South Africa, Namibia, Malta and Australia protect the great white shark within their oceans, but it is still a feared and misunderstood fish. Therefore the conservation efforts do not have enough reach and impact.