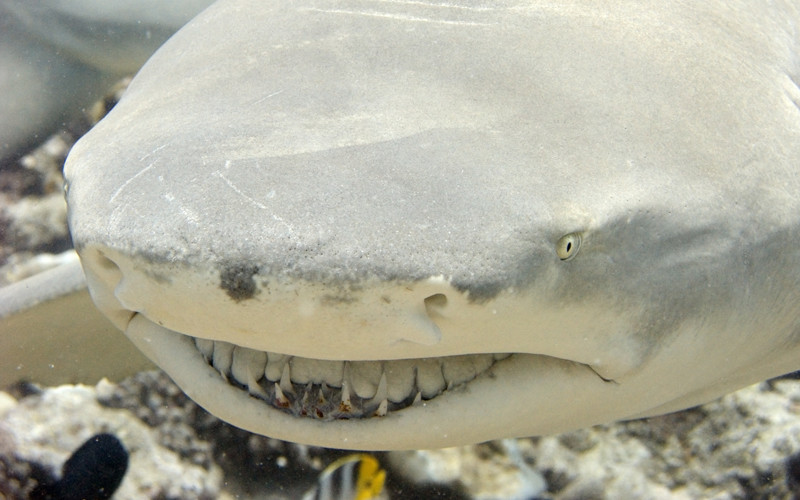 The shallow waters of the oceans disguise this shark characterized by the yellowish color of its back. It was first described in 1868 and was called Hypoprion brevirostris, but later Hypoprion was changed to Negaprion.

It is a member of the order Carcharhiniformes, of the Carcharhinidae family and the genus Negaprion.

It is a big and robust shark with a nozzle shorter than the width of its mouth. It reaches a length of 2.4 to 3.6 meters and a weight of 90-183 kilograms being the female slightly bigger than the male.

It has a flat head, two large dorsal fins of similar size, one convex pectoral fin and one pelvic fin with concave back edges. The upper lobe of the caudal fin is larger than the lower. Its small eyes have a retina that has in the center a horizontal band useful to provide clear visibility under the water.

Its common name comes from the yellow or brown coloration of the back of its body. Thanks to this feature can camouflage perfectly with the bottom of the ocean in shallow waters because its color is similar to the sand of the sea floor.

The largest populations of this species inhabit regions of the Atlantic Ocean.

The largest populations of this species inhabit regions of the Atlantic Ocean, but smaller concentrations also dwell in the Pacific Ocean. In the Nearctic realm of the Atlantic, they are distributed from the coast of New Jersey in the United States to the south of Brazil, passing through the Gulf of Mexico and the Caribbean Sea. To the east, they reside around the African coasts of Senegal and Ivory Coast. In the eastern Pacific, they are located from Baja California in Mexico to Ecuador.

This shark likes to inhabit coastal shallow waters. The usual depth in which they live is around 90 meters. They dwell areas with mangrove, coral reefs and can live in enclosed bays and even near the docks.

Although it is a saltwater species, it is possible that it wanders near the mouths of rivers. Its adaptability allows it to withstand deep water with little oxygen.

All sharks are thought to be opportunistic predators, but the lemon shark challenges this belief. This carnivore proves to have a preference for a particular prey and with a specific size, so its food is selective. In summary, it usually “chooses” animals not fast and medium-sized.

Their hunting technique consists in harassing the prey after detecting it. Quickly approaching it, and before making any physical contact, it stops abruptly. Then it hits the victim, holds it tightly around the head, and shakes it repeatedly until it can tear off pieces of flesh.

Their favorite preys are bony fish, mollusks, and crustaceans. Occasionally they catch seabirds and even other small sharks.

The lemon shark can be solitary or show a social behavior by grouping with up to 20 members according to sex and size. Social interaction and group life seem to improve the processes of courtship, communication, predation and protection. Similarly, offspring have a higher chance of survival when living alongside other small sharks.

They exhibit a learning capacity from such interactions.

Research of the Negaprion brevirostris brain, show that the species has an apparent preference for social interaction, cooperation and the establishment of hierarchies of dominance and stable social relations. They also exhibit a learning capacity from such interactions.

It is an active animal during the day although it prefers to rest in silence in the bottom of the ocean. It sounds strange, but this activity requires more energy than swimming as it takes a lot of effort to pump water through the gills and avoid sinking. Their activity increases during the nights and mornings.

This viviparous shark reaches sexual maturity at around 6.5 years old. The embryos develop inside the mother and feed on the nutrients from the yolk sac.

Before gestation, sharks mate during the spring and summer months. The fertilization is internal, and the wounds on the female’s pectoral fins indicate that the male bites her to hold it and insert its clasper. Apparently, the female stores the sperm of several males inside so there is sperm competition. That is why a single litter can have multiple paternity.

The gestation period lasts between 10 and 12 months. The female gives birth to 4-17 offspring and then waits one year to having offspring again. Meanwhile, those newborn stay in breeding areas until they reach a length of 90 centimeters.

It shares some threats with other shark species; its meat, liver, skin, and fins are highly valued in the gastronomic and medicinal fields. That is why there is an intense commercial and recreational fishing that negatively affects the survival of the species. Besides, it is in danger because its habitat of mangroves and shallow waters are devastated by human activities, mainly by constructions in the coasts.