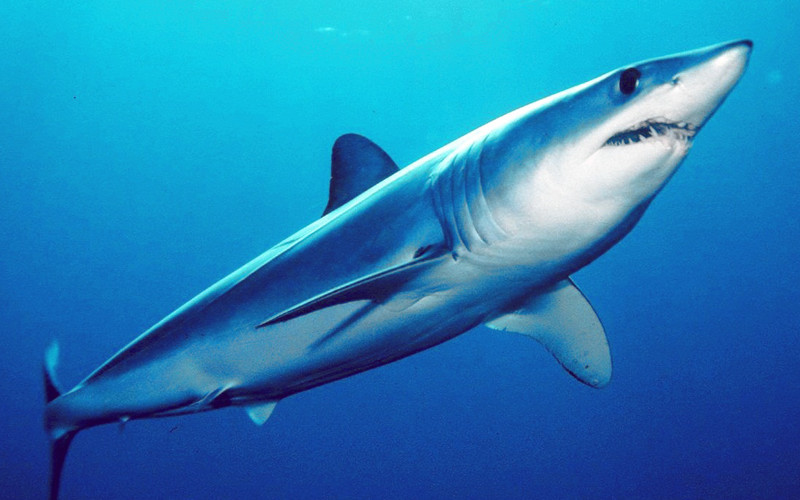 The shortfin mako shark also is known as the blue pointer and bonito shark. It is a fast speed-swimming shark that has been called “the peregrine falcon of the sharks” in allusion to the fastest bird in the world. It is considered an animal dangerous to humans because of the speed which can attack and its ability to jump into the fishing boats.

It belongs to the order Lamniformes, the Lamnidae family, and the genus Isurus.

The body of the mako shark is cylindrical, fusiform and hydrodynamic. There is sexual dimorphism since the female is visibly larger than the male. An adult can measure between 3.2 and 3.8 meters in length and weigh between 60 and 135 kilograms although females can reach 150 kilos.

The body of the mako shark is cylindrical, fusiform and hydrodynamic.

It has a powerful caudal fin semicircular with a highly developed lower lobe. It has two dorsal fins but the second one is much smaller than the first one, as well as two pectoral fins shorter than the length of the head. Its gill slits are long and have small black eyes; Young individuals have the tip of the snout black. Its teeth are large and very sharp, and they stand out when the shark closes the mouth.

Its body has a gray or metallic blue color on the dorsal area and a lighter color in the belly area.

This shark inhabits all the temperate waters of the world, with larger concentrations in the Pacific, Atlantic and Indian oceans and in the Red Sea and the Mediterranean. In the Pacific, it is mainly located along the American coasts and from the Territory of Primorye in Russia to New Zealand and Australia. In the Indo-Pacific, it dwells from East Africa to Hawaii and in the Atlantic Ocean from the Gulf of Maine to Argentina and Brazil and from Norway to South Africa.

It is a pelagic species that occasionally approaches the coasts. Its natural habitat corresponds to tropical and temperate waters, epipelagic and coastal areas with depths up to 150 meters.

It is an efficient predator and therefore, a carnivorous animal that feeds on several species of fish, but certainly the favorite food of the populations who live in the Atlantic is the bluefish (Pomatomus saltatrix) that represents almost 92 percent of its total diet. Other common foods are cephalopods like octopus and squids, bony fish (mackerel, tuna, swordfish, etc.), dolphins, turtles, seabirds and small sharks. Every day, it consumes 3 percent of its weight and needs 1.5 to 2 days to digest its food.

When hunting, the mako shark stays under the prey after identifying it. Before the victim detects it observing its movements, the shark swims vertically toward the prey, immobilizes it by biting its caudal peduncle and begins tearing pieces of flesh.

The mako is the fastest shark on Earth. It reaches up to 32 kilometers per hour with gusts of 72 km/h and is capable of traveling up to 55 kilometers in a single day. Therefore it shows signs of being a migratory species. This fish can also jump, as it has been seen doing it out of the water reaching up to 9 meters height.

Mako sharks are solitary individuals but may be grouped according to sex. It does not represent a grave danger to humans since it lives far from the coast.

Are solitary individuals but may be grouped according to sex.

The female reaches sexual maturity when it equals a length of 3 meters, while the male can mate when it gets a length of 2 meters. It is a polygamous and polyandrous species that commonly form groups differentiated by sex, that is, males and females unusually get together if they do not have the objective to mate, which happens between late summer and early fall.

Many bodies of adult females exhibit scars on their bellies, flanks, and pectoral fins, indicating that perhaps the male is aggressive during mating. Either way, the male internally fertilizes the female, and the offspring develop inside the body of the mother (ovoviviparity). The gestation period lasts between 15 and 18 months, after which the female gives birth to a litter of 4 to 25 live offspring. The female waits about 18 months to get pregnant again, so it reproduces every 2 or 3 years.

The mako shark is an important species for commercial fishing. In addition to its flesh, fins, oil, liver, and cartilage, its jaws and teeth are decorative objects and even trophies. And like other species of sharks, it is a victim of bycatch.

The species is considered “Vulnerable” in the Red List of the International Union for the Conservation of Nature. As a consequence, some organizations have taken action on the matter in an attempt to protect and guarantee the survival of this shark species. For example, the United Nations Fish Stock Agreement (UNFSA), demands countries to create conservation strategies and follow the International Plan of Action for the Conservation and Protection of sharks, recommending a continuous assessment of the status of the shark populations, which also includes the mako shark.