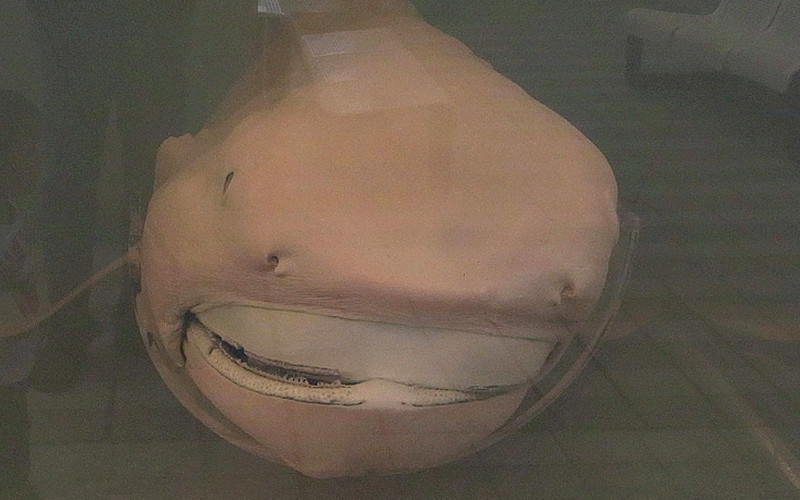 The megamouth shark is an exotic species discovered in 1976. It is very unlikely to see, and no one suspected its existence until then, when a new family, genus, and species was created to classify this shark.

It is the most primitive living species of the order Lamniformes but is the smallest shark of those that feed on plankton. He is a member of the mentioned order, the family, Megachasmidae, and the genus Megachasma.

Its large head and the huge mouth that indicates its name are the main features that help to identify this species undoubtedly. It has a length of 4 – 5 meters and weighs about 800 kilograms. The color of its cylindrical and flaccid body is usually black or dark brown on the dorsal area and pale gray in the ventral region. Its skin also has dermal denticles as other shark species.

It is the most primitive living species of the order Lamniformes.

It is not a skilled swimmer. Their dorsal fins are small and the second is half the size of the first one. It has pectoral fins smaller than the size of its head, and it has an asymmetrical caudal fin with a long upper lobe.

It has tiny eyes, five pairs of long gill slits, and a short, rounded snout. Inside the mouth has a tongue covered with mucosa and about 50 rows of small hooked teeth but only uses the first three rows. Around its mouth, it has photophores which glow and appear to act as baits for small fish or plankton.

Its distribution and habitat are still uncertain, but a few sightings in areas of the Pacific, Indian and Atlantic Oceans are on record; and since its discovery in Hawaii, only 55 more sightings have been registered in countries such as Brazil, Senegal, the Philippines and Indonesia. The first discoveries were on the coasts of California, Japan, and Australia, in addition to the Hawaiian islands.

It is an inhabitant of the deep waters (between 150 and 1,000 meters) that likes moderate and warm temperatures.

It is one of the three species of sharks that are fed by filtration of plankton. Its diet may include shrimp, copepods, and pelagic jellyfish.

There are few details about its form of feeding, but most scientists think that it swims slowly through the plankton concentrations and opens its huge mouth to suck the water, then lower the jaws, retract and filter the planktonic organisms by expelling the water through its gills.

The limited observations of this shark provide little information but render an overview. It is known to exhibit a behavior similar to that of other benthic fishes, and it does not tolerate the disturbances external to the ocean, perhaps that is the reason for its late discovery.

This shark is a vertical migrant during 24-hour cycles.

In the early 1990s, a tag was placed on megamouth shark to monitor for two days its behavior in the coasts of California, United States. As the sun start shining, it swam to a depth of 120-160 meters but began to ascend as the sun began to hide. During the night it stayed near the surface at depths between 12 and 25 meters. The research gave evidence that this shark is a vertical migrant during 24-hour cycles, spends days in deep water and nights in mid-depth waters.

Probably, this pattern of movement is related to the behavior in the columns of water of his favorite prey, which he follows to feed on.

Sexual maturity occurs when the shark reaches a length of about 4 meters. Fertilization is internal, so the male inserts its claspers into the female oviduct to transfer the sperm.

The megamouth shark is an ovoviviparous species. Therefore the pups are developed inside the mother’s body until their birth. The genders separate and look the same as adults.

The ovaries of the female are similar to those species that practice oophagy, and this means that presumably the offspring of this shark also feed on other eggs inside the body of their mother.

The fact that this shark is hard to observe implies a problem in its research and the detection of the type and severity of its threats. In fact, the International Union for the Conservation of Nature does not yet have enough data to classify this species.

So far, its greatest threat is bycatch resulting from commercial fishing activities. On the other hand, some museums welcome deceased individuals for its exhibition. So far proper conservation measures have not been taken.