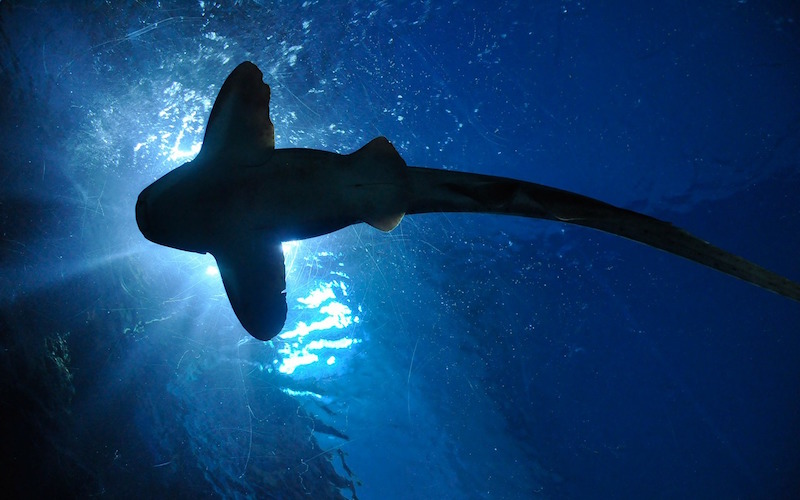 Sharks are not man-eaters nor furious beasts that only live to devour everything they find in their path. There is a lot of misinformation about the life of these fish. Some people believe that it is not necessary to protect them because they are ruthless but is not like this.

THE NEED TO PRESERVE SHARKS

Knowing, supporting and planning shark conservation strategies is an important issue for both the aquatic ecosystem and the life of humans. Yes, the preservation of sharks is of significant interest for us and the planet environment.

As you know, the food chain needs all its links to be complete. In the absence of one, the chain fragments and initiates many disturbances in the ocean. Sharks are at the top of the food chain, so if their prey is scarce due to contamination, overfishing or any other cause, they are more likely to die and engage in an aggressive or abnormal behavior.
But in addition to the above, sharks are useful and precious for human life. Many of them clean the ocean by consuming the remains of dead animals and plankton, so the harmful algae pests and those that cause red tides are controlled.

Knowing the anatomy of sharks provides useful information on the physiology of fish and the origin and evolution of marine animals and even humans given the millions of years that they have been on Earth. Their anatomical characteristics inspire and give ideas to scientists and engineers to design machines, tools, and transport devices.

The latest research opens the range of possibilities applied to human health. Knowledge about the properties of their blood that has anticoagulants could be useful in the treatment of heart diseases. Their immune system and their highly developed senses generate interest and optimism in the scientific and medical communities, which plan to apply some of the ideas from that to Humans, through devices or inventions.

We owe a lot to sharks. It is clear that protecting and preserving them are necessary.

ORGANIZATIONS FOR THE CONSERVATION OF SHARKS.

The good news is that many countries, governmental and non-governmental organizations are making efforts to protect and conserve shark species. In 1991 South Africa became the first country to protect legally white sharks, perhaps the most affected species. That same year, the UN (United Nations Organization) banned gillnet fishing on the open seas, which slightly recoverd salmon shark (Lamna ditropis) populations. Then, in the year 2000, the United States passed a Law prohibiting shark finning.

One of the international organizations most involved in the conservation of sharks is the FAO (Food and Agriculture Organization of the United Nations) which, through its Department of Fisheries and Aquaculture, manage the International Plan for the Conservation and Control of Sharks, which regulates, assesses and guarantees the sustainability of shark fishing.

Another organization very committed to the cause is the WWF (Global Fund for Nature), which seeks the preservation of the environment in general. Concerned about the overfishing of sharks, it developed an initiative called Smart Fishing, whose intention is to improve the management of protected areas where sharks dwell and to develop ecotourism projects in the natural habitat of sharks. It also directs and supports the WWF Hong Kong Shark Fin Initiative and Smart Fishing Network Initiative-Asian Seafood Guides.

On the other hand, CITES (Convention on International Trade in Endangered Species of Wild Fauna, and Flora) has added some species of sharks to the group of protected species.

The Species Survival Commission of the IUCN (International Union for the Conservation of Nature), in a report, stated that to address the problem of endangered sharks, it is necessary to:
(a) End once and for all the infamous finning practice.
(b) Follow the species fishing limitations.
(c) Improve the monitoring of fish stores and markets.
(d) Reduce bycatch.
(e) Invest in research and evaluations.
(f) Cooperation among countries to achieve the objectives.

Some conservation groups are smaller and less known, but their work is still relevant. In fact, some members of such groups go to the ocean and make the job of freeing trapped sharks in nets and target for illegal fishing. They also fight the sale of shark fin soup and try to unmask a business that profits from it by declaring that the miraculous properties in the soup are untested.

ACTIONS THAT EVERYONE CAN TAKE.

These organizations should not be the only ones concerned about the protection and conservation of sharks. Simple strategies taken from all of us can reduce the mass killing of sharks:

– If fish consumption is frequent, it is important to be sure that the establishment and its suppliers have legal or governmental certification that confirms a sustainable activity.

– If recreational and sports fishing persists in a region, it is tough to eradicate it, so it is more feasible to support and promote the capture and release of sharks to the sea. It is important to inform and familiarize others about the risks to sharks.

– It is elementary not to support the consumption of shark fin soup or products made with shark cartilage. They are often said to contain valuable nutrients and almost miraculous properties, which is not confirmed.

– In the case of illegal activities or that threaten the life of sharks and endanger the survival of small populations of them, you should not wait to denounce it to the proper authorities.