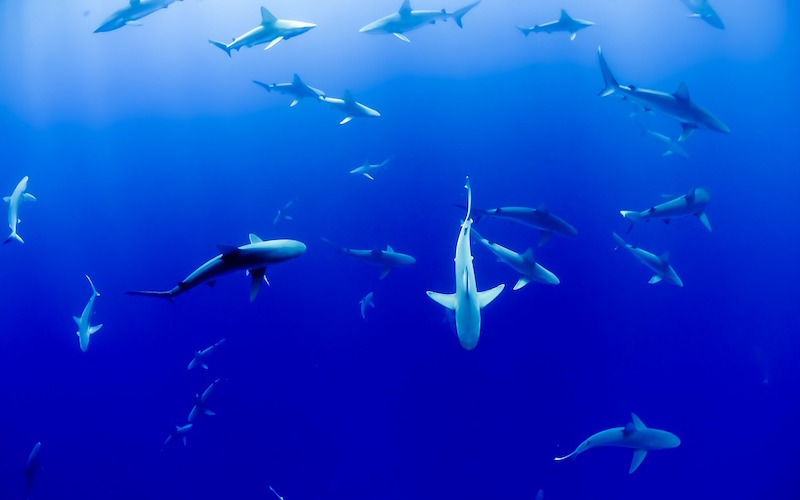 The information on the behavior of these Chondrichthyes is scarce when compared to other fish or mammals, and is because sharks hardly meet the necessary conditions for human research. Rarely they stay in the same place, and most of the time they inhabit inaccessible areas for research.

Most sharks make most of their activities during the afternoons and prefer to hunt at night. They are usually solitary: they swim and hunt alone most of the time, but they meet with other sharks in some special cases, like the period of mating or the zones abundant in food.

Some species show a social structure based on groups called “schools” without a strong reason for this because sharks do not need special protection against predators. The sharks that socialize usually segregate according to the size of the individuals.

Some species show a social structure based on groups called “schools”.

Hammerhead sharks are an obvious example of social sharks with a clear hierarchy, and it is common to find them gathered around islands and other areas with an abundant food source. Other species try to be careful with them, as their excellent maneuverability given by the shape of their heads is advantageous compared to other sharks.

However, some species hunt in groups when it comes to obtaining a large prey. Sharks form large groups, and all cooperate first by surrounding the prey, and then, when they are already captive, they gradually approach it until one of the predators takes the first bite. It is then that the others begin to attack and end with the prey. This cooperative behavior is extremely rare.

The methods of hunting in this predators are different and make the element of surprise their primary weapon. Benthic sharks, for example, camouflage themselves beneath the bottom of the ocean and if they detect a possible prey, they stay still, waiting for the animal to get close enough to attack it from below and occasionally, to swallow it whole.

In contrast, pelagic predators must cautiously approach the prey and hurl themselves at it before it knows what is happening. Sometimes, before eating, they perform an entire display of exaggerated movements that they intend to threaten. If it is a large animal, sharks wait for it to bleed to death and then eat it.

Hunting activities require a lot of energy, and as a consequence, large predatory sharks feed only a few times a week and are not always eating, as is often believed. Small species, on the other hand, eat a couple of occasions during the day since their prey are also small.

Their feeding behavior changes according to the presence of prey and the competition for them. If sharks stimulation is intense, it is possible that the excitement increases and they are victims of a frenzy that results in cannibalism. 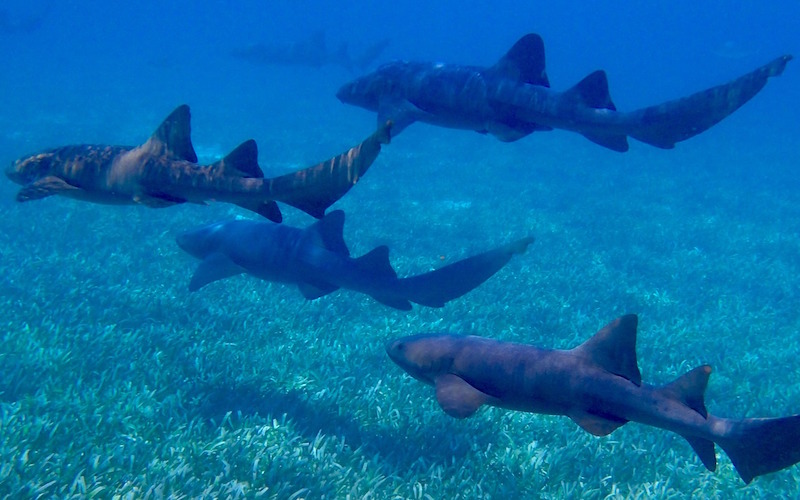 Migration is a fundamental activity for some sharks, whose motive is the search for food as their prey also migrate and to reach the areas where they mate and spawn. Their journeys can take them through all the ocean basins traveling thousands of kilometers during a year. Sharks remember the migration patterns of their favorite prey and do not hesitate to follow them, but their migratory patterns become more complex than those of birds.

Sharks remember the migration patterns of their favorite prey.

Occasionally they congregate around fishing boats because they remember that the fishermen throw discarded animals.

Several species can travel at the same time, and until recently, some thought that most stayed in one place, but that is not accurate. For example, blue sharks (Prionace glauca) can migrate from the United States to Brazil, which is a significant distance. Another famous migrant is the whale shark (Rhincodon typus), which goes to specific areas to spawn in corals.

It is worth remembering that not all sharks are aggressive and they do not attack for pleasure. Many species are characterized by their docility and even by their timidity. As an example, the shark whale mentioned above is very peaceful, quiet and does not react with fear or aggression to the proximity of humans.