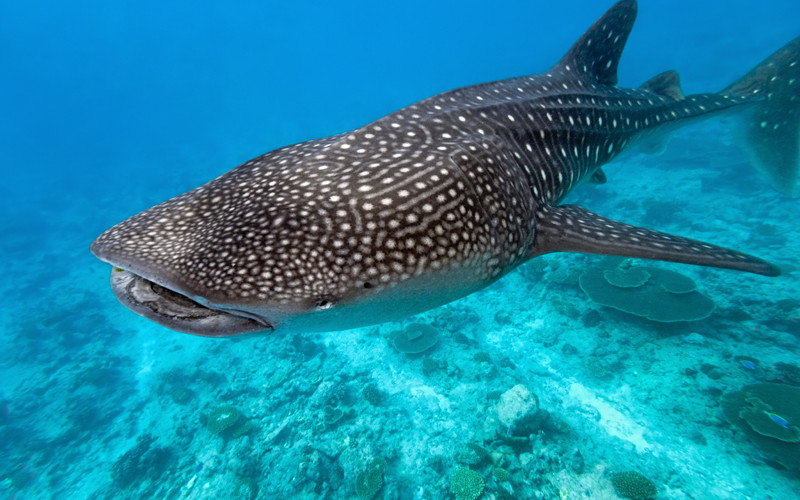 The whale shark is a giant of the oceans: the dimensions of its body gives it the title of the largest fish in the world and therefore, also the biggest shark.

It is the only member of the genus Rhincodon. It belongs to the order Orectolobiformes and the family Rhincodontidae.

This shark shares the name of the cetaceans because of its massive size, but it is a fish that can measure up to 20 meters long, although it has an average size between 9 and 12 meters long. It weighs over 12,500 kilograms. Its fusiform body is wide in the middle area and narrows in the tail and head that is wide and flat, and it has two small eyes on the front. Its mouth, located towards the end of the snout, can open about 1.5 meters. Inside there are 300-350 rows of teeth and ten pairs of useful pads to filter the food.

It has one pair of nostrils at the tip of the snout, lack of circumnarial grooves but it has rudimentary beards. It has five pairs of gill slits on each side of the head and spiracles behind the eyes. Like many pelagic sharks, it has one pair of dorsal fins (one larger than the other) and one pair of pectoral fins as well as a caudal fin.

The skin of the whale shark has a blue-gray coloration on the back and white in the belly. The upper area has light spots that form unique patterns in each shark.

The extensive distribution of this pelagic species covers all the temperate and tropical seas of the world except the Mediterranean Sea. They inhabit waters in the latitudes between 30 ° north and 35 ° south in countries like Mexico, Belize, Ecuador, South Africa, Australia and the Philippines.

This shark inhabits both deep waters and shallow waters with temperatures between 21 ° and 30 ° C but tolerates water up to 3 ° C degrees in some cases. Their favorite habitats are coastal areas with abundant food. 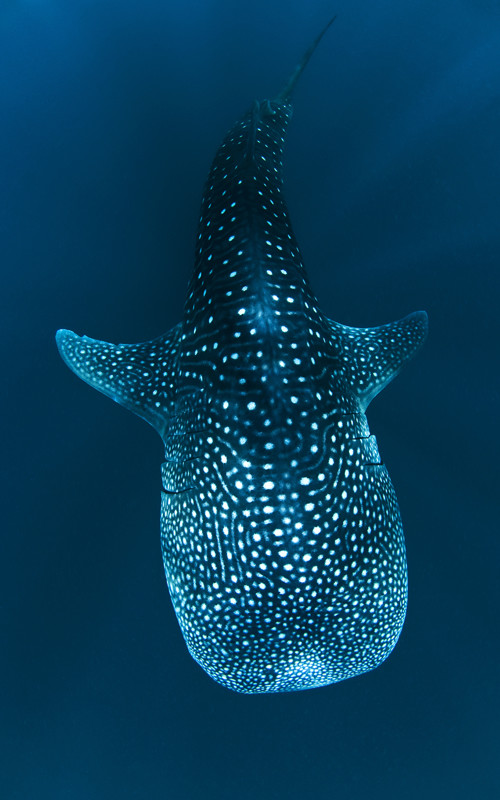 Fortunately for many animal species (including humans), the natural food of the large whale shark is mainly plankton, although occasionally includes other small animals such as krill, jellyfishes, sardines, anchovies, mackerels, squids, and crabs, as long as they are small.

Their feeding method consists of suction and filtration; Is called “passive feeding” since there is little pumping and muscular activity in the gills while they eat. While swimming, the shark tends to keep its mouth open to access the food and suck it hard. Once inside, the whale shark closes its mouth, and the plankton gets trapped in its filtering organs, and at the same time, they expel the water through the gills. The reason for the presence of teeth is unknown because they do not use them for eating.

It can actively feed when it opens and closes its jaws to catch the food at any given time, and passively when it keeps its mouth open as it swims forward and the food gets inwards.

It is one of the most docile sharks that exist and does not present any danger to humans. They even allow divers to have contact with them despite the scientists’ disapproval of this activity.

It is an intelligent animal who demonstrates the ability to learn. Captive sharks in aquariums exhibit changes in their behavior when humans come to feed them as they begin to swim in circles. Observations indicate that they sometimes perform a cough-like activity, presumably to clean their filter pads.

They usually swim unaccompanied by other sharks, but on certain occasions (feeding and mating) they travel long distances together. It is also possible that they modify their swimming patterns according to the environmental conditions. 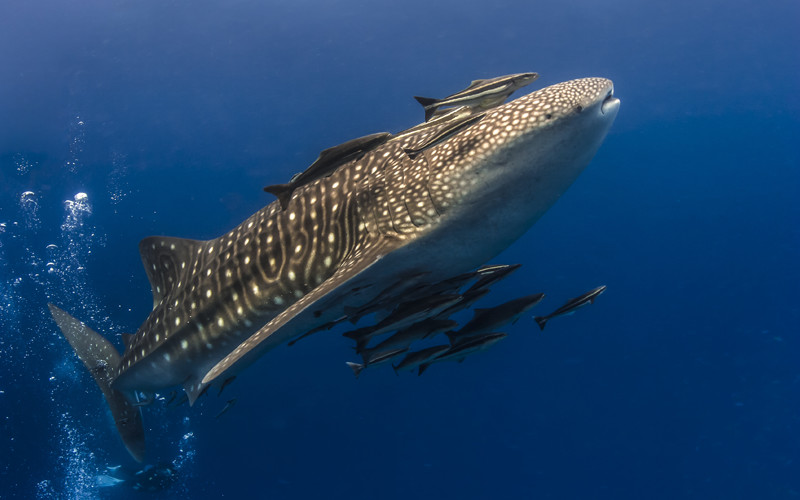 Some scientists think that they have a polygamous mating system, but this is not confirmed. Except for some research, there is not much information about whale shark mating and reproduction and birth has never been observed.

They reproduce through ovoviviparity and females deliver live pups that reach a length between 40 and 60 centimeters. The number of offspring is not determined, but apparently, they are many because during the 90 s a female captured had about 300 fetuses inside. The pups are not born all at the same time; the female stores the sperm of a male and can develop new offspring after some time.

Despite their size, they are not free from predators in their natural habitat. Orcas, blue sharks, white sharks and blue marlin attack mainly young individuals who are still vulnerable because of their small size. On the other hand, humans considerably contribute to the status this shark has on the IUCN Red List: Vulnerable. Their meat is valued in Asia, and their fins are sold to elaborate soup with supposed medicinal and aphrodisiac properties.

The conservation efforts for this species are still incipients although some countries are already protecting them, for example, countries, like the Philippines, and Australia, regulate the activities related to whale sharks. Their capture is banned in that Asian country, and the Australian Department of Conservation is responsible for monitoring the tourist visits to the whale sharks. 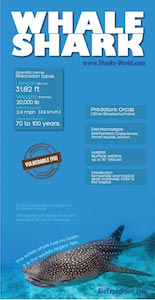