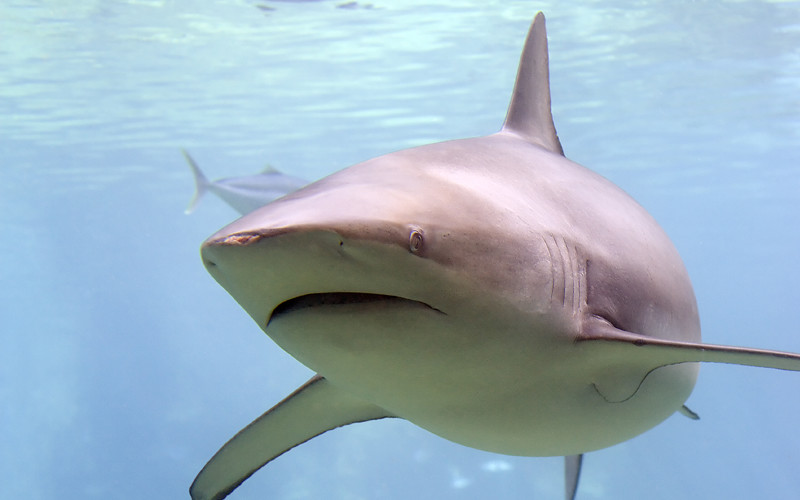 THE EARTH BEFORE THE SHARKS

Fossil evidence shows that sharks populated the planet before the dinosaurs existed, that is, more than 400 million years ago. Since the skeleton of the shark is composed of cartilage, the only thing preserved from prehistoric sharks are fossil samples of the dermal denticles and teeth, but there are some exceptional cases of preserved skeletons.

The first fish appeared on Earth about 510 million years ago. They were small, jaw-less beings called ostracoderms. Evolution did its job, and that’s when the first prehistoric sharks first appeared.

The way in which we know them today is believed to be the results of evolution that started about 100 million years ago.

Of course, not all of the sharks that once were on Earth exist today. Fossils prove that many species have become extinct.

The first fish appeared on Earth about 510 million years ago.

The oldest fossil of a prehistoric shark dates back 455 million years and consists only of dermal denticles. This animal lived during the Ordovician period in an environment devoid of terrestrial plants and vertebrates. However, for some paleontologists, the origin of the fossil is not clear, and it is preferred to rely on another whose age is estimated at 420 million years, therefore, it was an inhabitant of the Earth during the Silurian period.

Shark teeth of the Devonian period were found in modern Europe and lived there more than 400 million years ago, but it is the only fossil known about them, and it comes from the remains of their teeth. These are small and measure approximately 4 millimeters wide, so the owners had a length not more than 30 centimeters.

Perhaps the most recent prehistoric sharks are those that belonged to the extinct genus Cladoselache, who lived about 370 million years ago. Their fossils were found in various areas of the United States. The appearance was not ferocious: they were about 1 meter in length, had triangular fins and light jaws, as well as a caudal fin resembling that of present white sharks.

Other paleontologists point to the Mcmurdodus, whose fossil record indicates its presence 390 million years ago. At that time, sharks were predators living near the shores. From the Carboniferous period, sharks diversified and scientists call this stage “the golden age of sharks.” There were sharks of varied shapes and sizes, to the point of being entirely different to the modern image of them. For example, the Stethacanthus had small teeth in the head!

During the Jurassic and Cretaceous periods, species of sharks called Hybodonts and Xenacanthis flourished. Some scientists argue that modern sharks evolved from the Hybodonts, but so far there is not scientific confirmation. The period of diversification was over, and the Sharks remained for several million years without drastic evolutionary changes.

At the end of the Jurassic, there were species with jaws more flexible than those of the Hybodonts, and this was a great advantage when feeding. As a result, the Hybodonts group began to shrink, and sharks similar to modern sharks began to spread.

The origin of modern sharks dates back 100 million years when many species had already become efficient predators and fast-swimming animals. In fact, most of the families of modern sharks arose during this period.

Towards the end of the Cretaceous, about 65 million years ago, a worldwide catastrophe (probably the fall of a meteorite on Mexican coasts) eliminated most of the species that populated the world at that time, including dinosaurs and mammals. Some shark species survived, and are roaming the oceans. Among the survivors are the cow sharks (Hexanchiformes) and the frilled sharks (Chlamydoselachiformes), which still bear much resemblance to their extinct relatives.

The origin of modern sharks dates back 100 million years.

In total, sharks have survived five mass extinctions over the last 439 million years. They are survivors!

Some of the early forms of sharks were quite small. There is evidence to suggest they looked more like fish. Some others were similar to eels; their faces featured noses that were round rather than pointed. Some others were huge with extraordinary dimensions, much larger than the largest shark available today.

Sharks did not have a brain as large as they have today. More than 2/3 of the size of their brain is for the senses, and this is one of the areas where sharks have significantly been able to evolve and to become a more intelligent species.

Their teeth were also different than they are today. Instead of being razor sharp they were smooth. However, these early ancestors also had the rows of teeth that replaced the missing ones like they do today. This kind of teeth could indicate that prehistoric sharks fed on plants instead of being meat eaters as some are today.