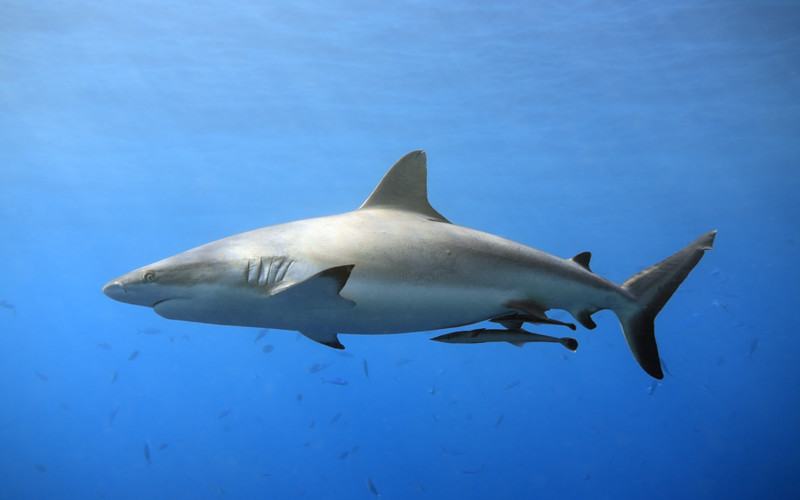 Shark Tails – Depending on the species

Each shark has a tail adapted to its physiology, its surroundings, and its lifestyle; Therefore, there is a great diversity of types of tails. Each one consists of a precaudal pit and an upper and lower lobe. In some cases, the spine extends to the tip of the superior fin, so the tail is called “heterocercal.”

In the body, the tail functions as a propeller. Swinging it forward and backward to advance in the water, it pushes the water around the fins creating a movement that produces elevation.

The thrust, velocity, and acceleration of the swim depend on the shape of the caudal fin, but some adaptations of the tail have purposes other than those related to swimming. For example, the Cookiecutter shark (Isistius brasiliensis) has bioluminescence in the upper and lower lobes of the tail that serve to attract the prey.

The caudal fin forms can be classified as follows:

– Typical sharks.
The upper lobe of its tails is longer than the lower lobe and turns upward at a moderate angle. Sharks of the Carcharhinidae family own these tails as well as thresher sharks (genus Alopias), which have turned their tail into a powerful prey stun weapon.

– Fast-swim sharks.
The tails of these sharks that swim in open waters are crescent shaped, and their upper and lower lobes are similar in size. Also, lateral keels extend in the precaudal pit. These characteristics favor the swimming efficiency of sharks, such as the whale shark (Rhincodon typus), the basking shark (Cetorhinus maximus) and the lamniform sharks.

– Benthic Sharks.
The upper lobe of the tails is positioned at a small angle related to the body and is quite long in comparison with the lower part. Therefore, the speed of their maneuvers and in general of their swimming is relatively slow. Its style of swimming resembles that of the eels, characterized by undulations.

– Cirrhigaleus and Squalus genera.
The upper part of its tails is longer than the lower, but this does not prevent only low velocities because the spine extends through the top lobe at a lower angle than the lobe itself.

– Angel Sharks.
In the case of these sharks, the lower part is larger than the upper one, and because of this, they can take off quickly when attacking some prey from below.

Sharks that have the upper lobe larger than the lower one have the advantage of getting more energy in situations that require rapid or sudden speed bursts.

Despite the differences, there are practically no extensive studies that address the morphology or evolution of shark tails concerning their lifestyle.

In this image, you can see the tails of various species of sharks, and according to the form, it is possible to get a general idea about the characteristics of their swimming. 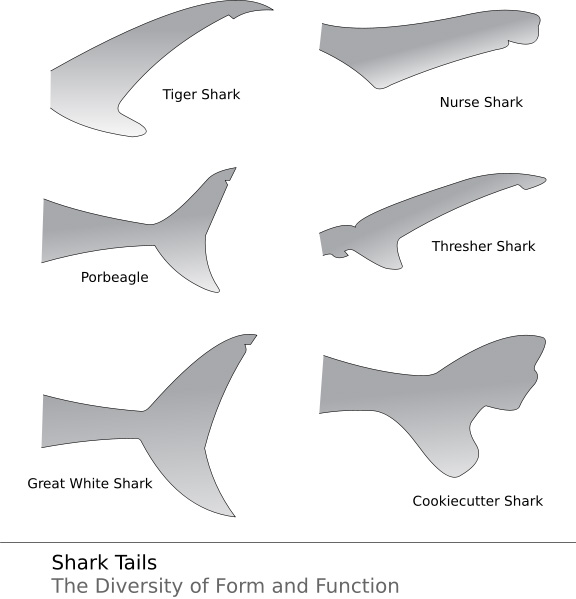