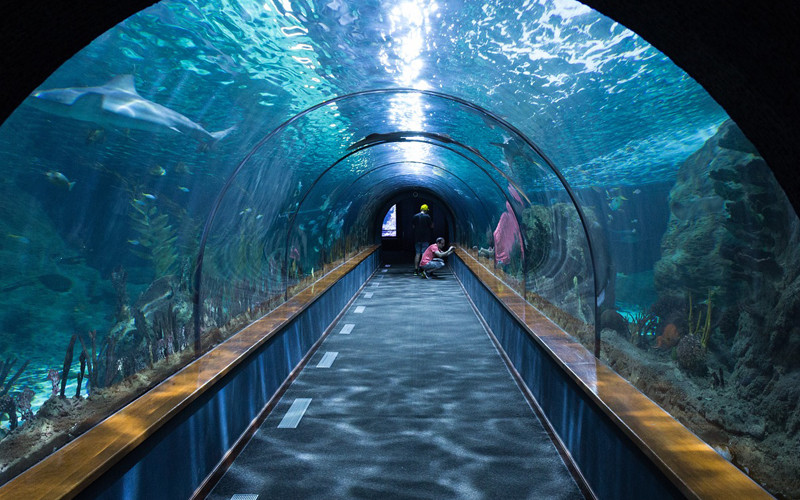 The possibility of keeping large sharks in captivity has been of great interest to many public aquariums, which seemed unlikely because they need more delicate care than most other fish. Until lately, the only species that lived in captivity were some species like leopard sharks and horned sharks, among others which are benthic animals and not very large.

THE CHALLENGES OF THE CAPTIVITY

The shark species most wanted by aquariums is the great white shark (Carcharodon carcharias), which has awakened the fear and fascination since its representation (exaggerated) in the 1975 film JAWS. The reality is that attempts to keep them in a huge tank in front of hundreds of curious eyes have not been very successful. In general, large species such as the Carcharodon carcharias are difficult to catch and transport. Their sharp senses are disturbed with the use of structures and machines, to take them out of the water, their weight can damage their organs while carrying them, because their cartilaginous skeleton does not provide the support needed for transport.

Besides, if an aquarium wants a great white shark in their tanks, it must fit a space large enough and adequate to its needs. The life of a shark in an aquarium also includes satisfying its feeding needs.

It is very expensive to keep sharks in captivity which is also another reason why they often aren’t found in aquariums. They require saltwater tanks with an enough room to move around, and they consume large amounts of food daily.

In 2004, the Monterey Bay Aquarium managed to condition a space for a great white shark, and it stayed there for six months, after which it was released back into its natural habitat. The attempt was made for the first time in 1980 when the same aquarium kept an individual of the same species in captivity but unfortunately died after 11 days at the facilities. That time the conditions were not adequately met.

To guarantee an optimal life development in captivity, it is important that aquariums or any place that keep sharks fulfill these conditions:

1. Sharks can move comfortably during their transportation to their next habitat.

2. Sharks natural movements and reactions are not limited or restricted. Some shark species like the great white shark are susceptible to stress if they do not execute physical activities.

3. The tank that houses the shark should be adequate and free of obstacles that hinder any of its movements.

4. The environment should not have human artifacts, machines or tools that stimulate their sense of electroreception.

Although some small species are prone to survive in aquariums, it is dangerous to use small places to exhibit or keep them. There have been cases of people selling sharks illegally to people who do not have the skills to keep a shark alive and healthy. Sometimes, when the young ones grow, space can become more limited, and those who own them are forced to make some adverse decisions for the animals, such as their release into the sea without previously experienced life in the wild.

Sharks are not domestic animals, so their care is more special than dogs cats or ornament fish. Keeping an individual involves an enormous investment of time and money and requires the knowledge about their life and care. Therefore it is an important responsibility.

PROSPECTS OF A LIFE IN CAPTIVITY.

Captivity is not an ideal condition for any animal, but this view changes when it comes to threatened species. In the case of sharks, many of them face serious dangers, and it is important to take measures to protect and preserve such species.

Life in captivity may be favorable to their survival to some degree. For example, the Monterey Bay Aquarium has made efforts to provide information on the species and it is a pioneer in exhibiting white sharks. However, some organizations disagree with the latter practice, and the aquarium has not keep white sharks again.

If there is an advantage of having sharks within human limits, it is the possibility to investigate their biological, physiological and health conditions that allow an assessment and subsequent establishment of conservation measures for the affected species. However, many experts agree that sharks in captivity don’t follow the usual behavior that they would in the wild. Therefore observing them in captivity to learn about how their life in the wild isn’t very useful at all.

It should not be forgotten that sharks are not “made” to live indoors. They need space and freedom like all animals. If it is not strictly useful for the survival of the species, do not support its captivity.