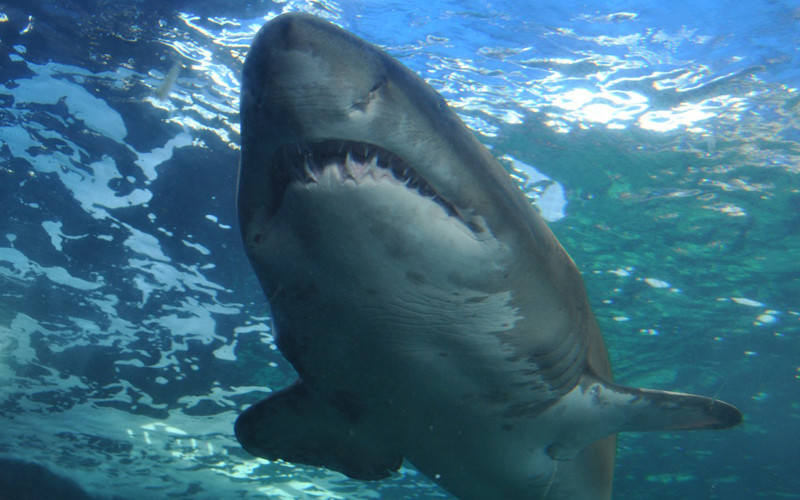 Sharks Around the world

Talking about the distribution of sharks is simple. These animals are present in all the oceans of the planet and all the seas. They usually live in salt water, but some species inhabit temporarily freshwater lakes or rivers, such as the bull shark (Carcharhinus leucas) and the Ganges shark (Glyphis gangeticus).

Its presence in any part of the world is proof of its adaptability and is indicative of the vast variety of species that exist. They can live in a wide range of habitats at different depths, temperatures, light conditions and salinities, from warm waters to polar seas. Some live in shallow areas or near the coast, but others prefer to live in the open sea, in deep waters and even on the ocean floor.

Sharks and in general any species inhabiting the upper parts of the ocean are pelagic species such as the white shark (Carcharodon carcharias) and the peregrine shark (Cetorhinus maximus). The sharks inhabiting regions close to the ocean floor are called benthic.

Usually, sharks roam at depths no more than 2,000 meters, and it is very unlikely to see them more than 3,000 meters below the surface. The maximum depth recorded, reached by an individual is about 3,700 meters. They prefer areas near the surface because there are a lot of nutrients that come from the rivers. These nutrients favor small species, from which other larger animals are fed and so on until they reach the sharks, located at the top of the aquatic food chain.

Most predatory sharks like warm tropical waters, such as the oceanic whitetip shark (Carcharhinus longimanus) and the blue shark (Prionace glauca). The latter stays swimming in the open sea during all its life.

Obviously, habitats are different for each species and are often related to the behavior of sharks regarding feeding, breeding grounds, cleaning stations and migrations. For example, the abundance of food sources (according to the species) can modify the migration patterns or the fixed habitat of individuals.

Clear examples of the above are the following cases:
– When young seals begin to enter the sea, the abundance of white sharks increases in the areas where seals swim.

– The presence of zooplankton, raised by the Gulf Stream, make the basking shark (Cetorhinus maximus) roam the areas bordering the largest concentrations from March to April as it feeds on tiny organisms.

One final important thing to mention is that sharks are not usually static beings but tend to move around different habitats. Therefore, not seen them in a particular area for some time, does not mean that they are not there or that they can not be there.

Many species of sharks migrate for mating, so you will find them in different locations when it is time for reproduction. Some migrate to warmer waters for this, which is evident every year on the coasts of Florida and California during the mating season.

Some species of sharks now dwell in places where they didn’t live before. Scientists think that this is because the food availability in their typical habitat is getting scarce because overfishing and they have to follow their prey and probably also because of the effect of global warming on prey distribution.

Sharks aren’t territorial like many other animals are. The females do not care for their young, so newborn sharks care for themselves since they are born.

Sharks are excellent adapting to new situations and environments which is the main reason why they have survived in the oceans for millions of years. Most species of sharks live in the oceans. However, some of them are known to live in bodies of freshwater.