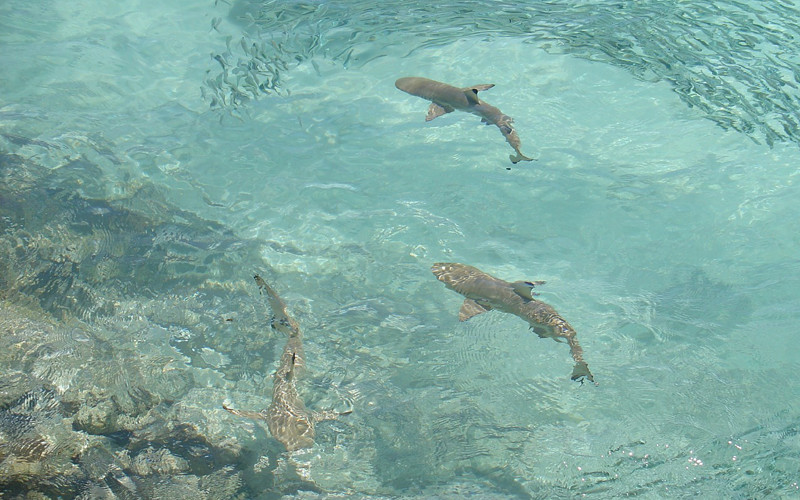 The reproductive habits of sharks determined by a series of biological characteristics cause a low reproductive potential of some species. General aspects of their reproduction are slow growth and late sexual maturity, very long reproductive cycles, low fertility and relatively extended longevity.

These factors explain why the survival of many species of sharks is in great danger; which combined with human practices such as indiscriminate hunting, show the urgency to end with a problem that in the long run, will affect more species of animals.

One of the main differences between sharks and other animals is that the males have claspers that they use to get the sperm into the females. Sharks have two claspers one on each side of their body.

Broadly speaking, reproduction in sharks may be sexual or asexual depending on the species. It is very different from the reproduction of bony fish since eggs (in particular cases) tend to be larger and in much less quantity.

In these cases the fertilization is internal. At the back of the pelvic fins are the male reproductive organs called claspers, which transfer the sperm to the female.

Is common that the male bites the female shark to get its interest or to immobilize it.

The mating usually consists of the insertion of the clasper within the oviduct. In some species, male sharks hold firmly to the female but in other species both swim together while mating. Courtship processes are also varied, but it is common that the male bites the female shark to get its interest or to immobilize it.

The females emit various types of chemicals into the water during the mating season. Since they are usually living apart from males, these chemicals attract them together.

The males often bite females during the intercourse to help keep the two sharks entwined throughout the process. The females aren’t harmed by this biting, although their skin shows the marks from the bites. 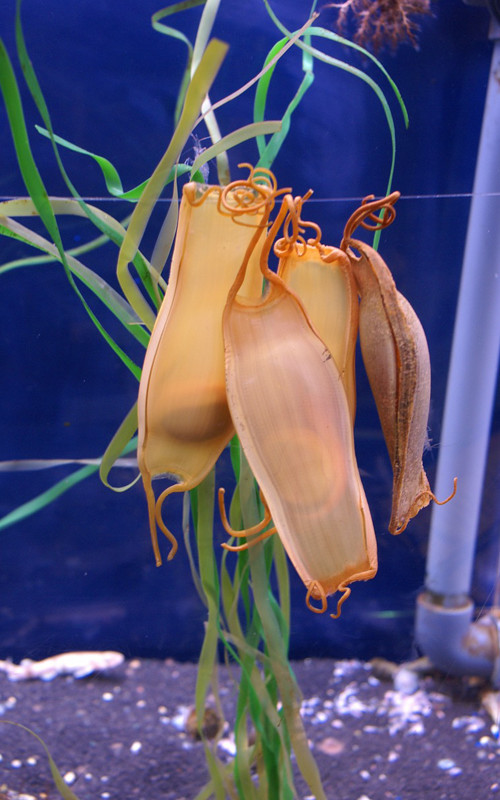 The shark reproduction can be:

LAYING EGGS (OVIPARITY)
After mating, the female deposits the eggs in rocks or algae, and occasionally in some sacks known as the mermaid bags. The embryos develop inside the eggs and feed on the yolk.

In total, about 30 percent of sharks are oviparous.

GIVING BIRTH TO LIVE SHARKS (VIVIPARITY).
The female gives birth to live offspring, just like mammals, and they are born fully developed. There is a placental link to the eggs since they feed on the placenta. Specifically, the yolk sac develops within a placenta that is attached to the wall of the uterus and gives the offspring the nutrients necessary for their growth.

These species give birth to live sharks which they abandon after the delivery. Newborn sharks instinctively know how to survive alone. Shark mothers do not take care of their young.

EGGS DEVELOP INSIDE THE MOTHER (OVOVIVIPARITY)
Most sharks have ovoviviparous embryonic development, as the eggs hatch within the oviduct of the female although she does not provide any food directly; the young feed on the egg yolk of the yolk sac and the fluids that the walls of the oviduct secrete. When they are ready, they hatch inside the mother, and the pups born alive and fully developed.

Some species practice a form of cannibalism known as oophagy, which means that they will eat the remaining eggs that have not hatched to end their development.

This type of breeding does not seem to be common since there are very few documented cases of species that reproduced in this way. It is strange because the asexual reproduction is not frequent in nature and usually appears in organisms less developed than the sharks. It is likely to occur when no male is available.

There are no further details about this process, but observations showed that females could conceive themselves through parthenogenesis, conclusion achieved when tests revealed that the offspring of a female had no genetic information from any male. Therefore sperm transfer was never performed.

Asexual reproduction appears to reinforce defenses against threats to the same species by diminishing the genetic diversity.