Why do Sharks sometimes Attack? 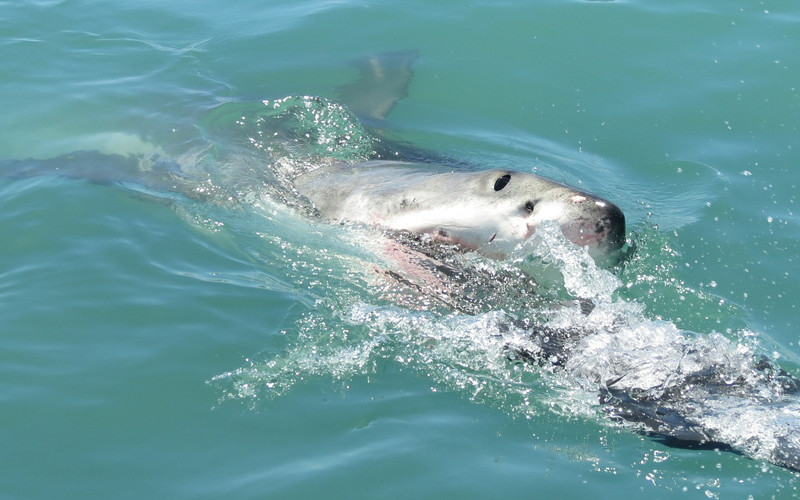 What person is not afraid of huge open jaws full of sharp triangular teeth? Well, you should know that not all sharks are big animals, that not all have sharp teeth and that not all eat meat.

However, humans are likely to be the target of a shark attack as long as they are in shark territory, which is water from all oceans, seas and even rivers and lakes.

About 100 shark attacks are reported each year in various regions of the world, of which approximately 5-15 cases are fatal. Although not a small number, compared with other causes of death at sea it turns out that deaths from shark attacks are not as frequent as we think.

THE ORIGIN OF THE ATTACKS

Many of the attacks occur in areas near the coasts, between sandbanks and in places of steep seabed because the sharks congregate there. Now, these do not attack for fun or because humans are very appetizing. Sharks have no particular liking for human flesh as it contains a lower level of fat than they need. Therefore, they are not man-eaters by nature.

Most of the attacks do not show unnatural aggression. An attack can occur when people are in an area that sharks consider their territory, and if it belongs to them, they will look for food in anything that seems an attractive meal. Naturally, this increases the chances of biting people in this area to check if it is their typical meal.

Fundamentally, the shark confuses a person with a natural prey. This kind of attacks also explain why many surfers are victims of shark attacks: when the shark looks from below, the silhouette of the man with his arms extended on the surfboard resembles a turtle, a sea lion or other common prey, so they see this shape and prepare to attack.

Some scientists think that sharks confuse humans with some other marine animals like seals or sea lions as sharks do not seek humans as prey. This assumption comes from analyzing several cases of white shark attacks on surfers, which concluded that looking a surfer from the bottom of the ocean resemble a seal.

However, considering the visual capabilities of white sharks contradict this theory as white sharks have an exceptional vision system, making this explanation very unlikely. Even more, this premise does not explain many other attacks close to the shore and sometimes in very shallow waters.

There is another theory which states that the super sensitive senses of sharks, can detect electrical impulses characteristic of muscle moving and such signals make them interested in tasting.

Some other theories introduced the idea that sharks are curious by nature and taking a small bite of a human is simply a way to satisfy their curiosity.

This explanation came from the fact that most of the times that a shark attack, they give only a quick bite and then swimming away. This behavior is very convenient for humans as sometimes people can survive the attack leaving the sea while the shark retreats.

Attacks can be provoked and unprovoked. The first ones happen when a person touches or hurts the animal so that it reacts to defend itself from what bothers or disturbs it. These are very rare cases, and their frequency is once a year. Unprovoked attacks are the most likely, and in these cases, sharks attack in three different ways:

Hit and run.
This modality takes place near the beaches if the shark is looking for food. The movements of people and confusion with their prey due to surfboards or activities cause the animal to approach, bite and walk away after verifying that the victim is not part of their diet. The person usually gets with minor limb injuries, and the chances of death are slim.

Surprise attacks.
The person and the shark are in deep waters, and the victim does not notice the presence of the animal. The shark confuses the person with a prey and bites it repeatedly before moving away or continue attacking. The unfortunate subject gets critical injuries that can be fatal.

Hit and bite.
In this case, the shark surrounds the person and strikes with the head or the body before snapping him. The victim is seriously injured and sometimes killed.

Among the hundreds of species of sharks that exist only a few represent a real danger to the humans. Incident reports show that only between 25 and 32 species are the perpetrators of attacks.

Whether for its strength, its size, its aggressiveness or its feeding habits, the following species are the ones that have most frequently attacked humans:

HOW TO PREVENT AN ATTACK

If you do not want to be the victim of a shark attack, it is essential to follow the recommendations of the Coast Guard and to heed possible warnings about shark sightings on the beaches. Additionally, you can avoid attacks if you avoid murky waters or close to sewage, places near sandbanks, or to swim during the twilight or the night wearing bright clothes and jewels as the reflected light can be confused with the brightness of the fish’s scales.

Another important recommendation is not to enter the water if you have a bleeding open wound since the smell of the shark is very sharp and detect blood from miles away. Finally, it is preferable to swim along with several people since sharks tend to attack individuals who swim alone.

Although they are not waiting for a man at sea, it is advisable to follow the recommendations to avoid an unfortunate situation.