What do Sharks Eat? 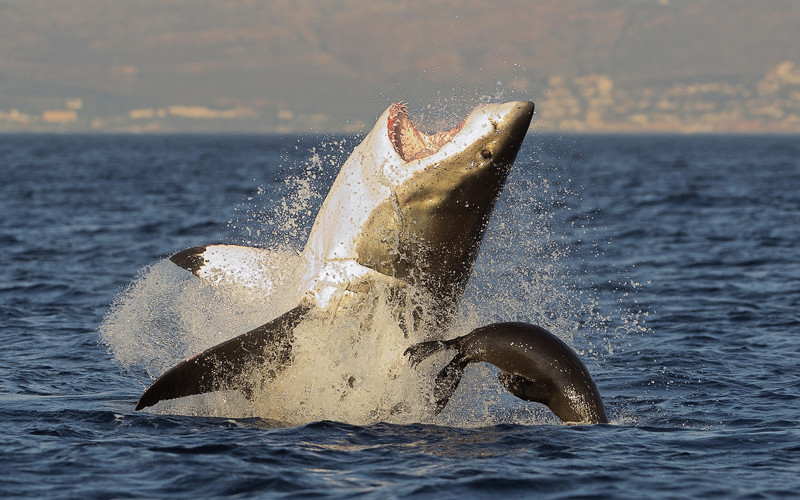 The eating habits of sharks are very different if you take into account the number of species that exist. The truth is that most sharks are carnivorous and efficient predators, although some others feed on plankton.

It depends on the type of shark as various species have different feeding habits. Shark feeding also depends on where they live because this is the main factor to define the kind of prey available.

Shark diet also adapts to survive. Some shark species may prefer certain types of prey, but when they are scarce, they adjust their eating habits to whatever is available.

Sharks aren’t picky with their food sources. Some sharks have been known to eat items including coal, oil, trash, and clothing that finds its way into the water.

Sharks classification split into two groups according to their diet:

A carnivorous shark diet usually includes fish, mollusks, and crustaceans. Large species also consume marine mammals such as dolphins, seals, sea lions, and porpoises, as well as large fish species such as tuna, mackerel, and even smaller shark species. Some even extend their consumption to seabirds.

Carnivorous sharks are very skilled hunting and use multiple strategies to catch their prey. Large species can swallow an entire animal or tear them through mighty bites to take large chunks. Thresher sharks (Alopias), meanwhile, stun their prey with their tail and Sawsharks (Pristiophoridae) twist their catch inside the sand.

Many of the sharks that inhabit the ocean floor are predators that use ambush tactics or camouflage within their environment. Other benthic sharks only feed on crustaceans, which they kill by crushing them against their teeth. On the other hand, it is common for some species to hunt together, cooperating to achieve more substantial loot than if they were alone.

These are often the smaller species of sharks that don’t need a huge volume of food to survive.

Hunting habits of sharks help to the survival of the fittest or the most adapted to the environment because sharks often make older, weaker or sick individuals their favorite target. In this way, the strongest survive, while the most vulnerable not.

Carnivore sharks have sharp teeth that allow them to cut their prey flesh quickly and even pierce the bones. Their teeth can be serrated or smooth and used to hold, cut or crush a victim according to the needs of each species. While white sharks have sharpened triangular tusks, the teeth of tiger sharks have jagged edges that facilitate the rupture of hard bodies of crustaceans.

These sharks passively feed on plankton, and they do not meet the traditional idea we have about these animals. But it is true, and in fact, some of the larger sharks prefer plankton to meat. These include the whale shark (Rhincodon Typus), the basking shark (Cetorhinus maximus) and the megamouth shark (Megachasma pelagios).

Their feeding strategy is a process of suctioning water and filtrating the food on it through long filaments similar to whale beards. Sharks catch the plankton in the filaments and swallow them when some quantity accumulates. In average, the peregrine shark filters every hour about 2 million liters of water from which it obtains only 2 kilograms of plankton. Their teeth are tiny, although present; they do not use it in the feeding process.

Strictly all sharks are carnivores to some degree. And although it sounds incredible, they only consume 0.5 to 3.0 percent of their weight daily, because their ability to chew is deficient and they need a lot of time to digest their food.

The digestive system of sharks is very different from that of mammals, and this is the reason for their slow digestion. They have a spiral valve inside a short section, and their intestines are very short. When food passes from the mouth to the stomach, it is stored in this last portion and thus begins the process of digestion. If the shark feels that ingested any bad food, it is not digested by the stomach, and then it is expelled through the mouth.

HOW MUCH DO SHARKS EAT?

The amount of food that a shark eats each day depends on the type of shark it is.

Some Shark species will eat huge meals and then not eat again for weeks. They can survive on the oil that is stored in the liver when they do eat. When that gets low, they will have the instinct to eat again.

Sharks are cold-blooded, and that is the reason why sharks don’t have to eat as much as most people think; this means their circulation is slowed down, and they can burn energy at a slower rate.

As you can see, sharks eat a variety of foods. While most of them are meat eaters, that is not the only thing they eat. For millions of years, the various species of sharks have been able to evolve. One reason for this is that they have eaten what is readily available as necessary to stay healthy and to be able to reproduce successfully.